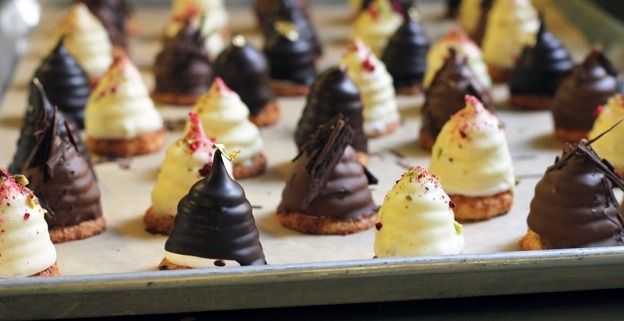 1. Whisk the sugar and egg whites together in a medium-sized bowl. Set the bowl on top of a pot of water over medium heat to create a Bain Marie. Heat the mixture, stirring occasionally, until the sugar is dissolved. Remove bowl from heat.

2. Fold the coconut and apricot jam into the egg white mixture until fully combined. Cover the surface with plastic wrap and refrigerate for 30 minutes.

3. Using your hands, roll the coconut batter into 50 small balls, approximately 1 heaping teaspoon (about 12 grams) in size, and arrange them on a sheet pan 2 inches apart. Wet your fingers slightly and flatten each ball to create a disk approximately 1¾” in diameter and ¼”thick.

5. Allow the macaroons to cool. Freeze for 30 minutes. The macaroon bases can be made up to three days in advance.

1. Combine the sugar, water and glucose in a very clean pot and place over medium heat. Monitor the temperature with a candy thermometer.

2. Put the egg whites in the bowl of a stand mixer fitted with the whisk attachment and set aside.

3. When the syrup reaches 220 degrees F, start to whip the egg whites and salt on medium speed until they form stiff peaks.

4. When the syrup reaches 243 degrees F, keep the mixer on medium speed and slowly pour the hot syrup down the side of the mixing bowl into the egg whites, being careful not to hit the whisk.Turn the mixer to high speed and whisk until the bowl no longer feels warm to the touch.

5. Divide the meringue evenly into 3 bowls, one for each flavor. Follow the recipes below to make each flavor meringue. Fold the additions into the meringue just enough that they are evenly incorporated. Don’t overmix.

8. Spoon the meringues into a piping bag fitted with a 1” round tip. 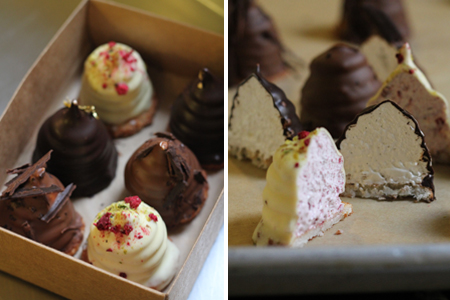 2. Holding the cookie from the macaroon base, dip the meringue into its corresponding flavor of chocolate, making sure the chocolate covers the meringue completely (see second image below).

3. Before the chocolate sets, garnish with the above items. 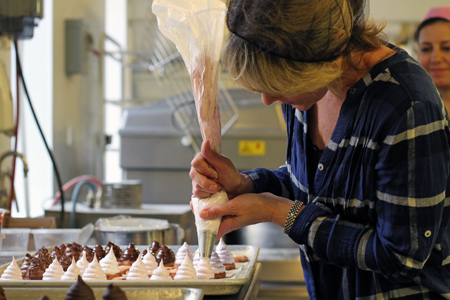 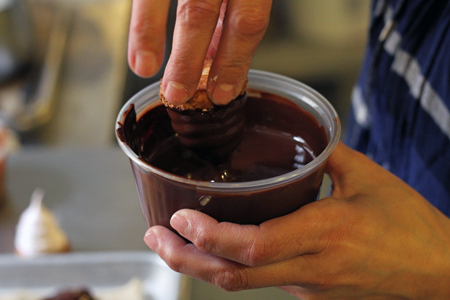